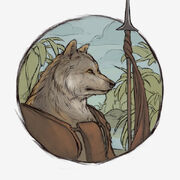 Udoadra are a wolf-like family of the Beastmen race in Fractured and native to Arboreus.

Also known as Wolf-Kin, the Udoadra are regarded as the most social and friendly family among all beastmen. While not larger than a human, they are considerably stronger and more resilient.

Udoadra’s true excellence lies in coordinated group fighting, as they are the keepers of ancient secrets that allow them to increase the power of their pack. A group of Udoadra is truly an unstoppable force of nature! Moreover, their social skills and attachment to other living being make them unparalleled animal trainers.

When transformed into their primal form, the wolf, the Udoadra gain speed and additional pack bonuses, unlocking abilities designed to empower allies and to cooperatively damage or restrain even the most powerful opponents.